Biographies of our Clergy 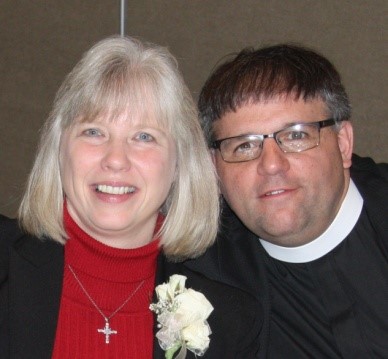 Fr. Jeff Wylie was called to Christ’s Church, Greensburg in October 2013 and was formally installed as Rector by then Archbishop of the Anglican Church of North America, the Most Rev. Robert Duncan on February 1, 2014. His previous parish was St. Mary’s Redbank as a part time rector and interned also at Holy Innocents Anglican church in Leechburg, PA.  He also worked as a Hospice Chaplain for over 16 years.

In Addition, he is also the Rector for Harvest Anglican Church in Homer City.

He is married to Jess (picture above) and have two adopted children Kellen (13) and Leona (8).  Prior to adopting Kellen and Leona, they fostered seven children over a five-year span.

Fr. Jeff received his Master’s of Divinity in 1993 from St. Vincent Seminary, Latrobe PA.  While there, he interned with Catholic Charities and Latrobe Hospital.

Fr. Jeff received his bachelor’s degree from the Pontifical College Josephinum in Columbus, Ohio with a major in Estudias De Latino Americano (Latin American Studies) and with multiple minors in History, Sociology, Philosophy, and Literature.   There he was awarded Who’s Who Among Students in American Universities and Colleges and was on The National Deans List.   He also led a group of 23 students on a summer mission trip to Mexico.

His hobbies and interests outside of Church include going on cruises and other family vacations. He also enjoys cooking, camping, and other outdoor activities. 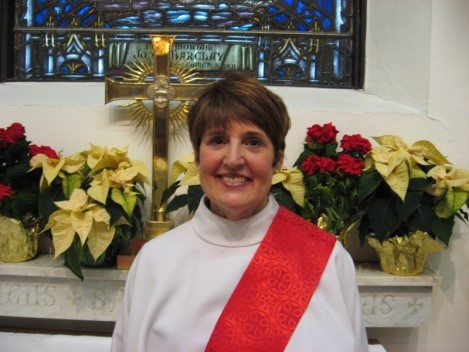 The Biblical source for the service of a Deacon is found in Acts, Chapter 6, “In that day, as the number of disciples was increasing, the Grecian Jews complained to the Hebraic Jews that their wives were being overlooked in the daily distribution of food.”  They needed help to see to the care of their wives.

So the Twelve gathered together and appointed 7 men from among them all, to be responsible for the women.  Acts 6, vs. 4 says, “We will turn this responsibility over to them and will give our attention to prayer and the ministry of the Word.”

A deacon is an ordained ministry unique unto itself.  It is said about a deacon that “the deacon has one foot in the world and one foot in the clergy.”  In the Anglican tradition, women as well as men, can serve as deacons.  “Deacon Gretchen” was ordained in 2011, after 3 ½ years of academic preparation through Trinity School for Ministry (Ambridge, PA).  In 2011, Bishop Duncan appointed her to serve at Christ's Church, which has been her home parish since 1991.

In addition to being a Deacon, Gretchen has her Master's Degree in Nursing, and works for Excela Health Homecare and Hospice, as a hospital liaison based at the Excela Latrobe hospital campus.  She works during the Monday thru Friday workweek, which allows for Church activities during the weekend, and meetings on week nights.